The First of God's Works

My family and I are pet lovers, especially cats. We've had kitties since my daughter was young. Our two cats now are named Taz, an ornery little tortoise shell, and Saki, a playful Siamese-tabby mix.

Needless to say, a pet is a real friend, though different from a human friend who can give advice. We receive unconditional love from a pet that we would never expect from a human. We might even disdain someone who showed a similar affection, for they’d seem to be needy and thoughtless. Perhaps that’s one reason we love our pets; the relationship is comparatively uncomplicated, yet very deep. I can’t overestimate the role our pets have played in our family's well being.

I became curious about which animals are mentioned in the Bible. (Find a Bible topic that interests you. What does the Bible say about angels and “guardian angels”? What kinds of trees are mentioned in the Bible?  How do musical instruments figure in the Bible? Go crazy: check out topics like the Israelite priesthood, or the way Mount Zion is used as a metaphor, and others. A good topical Bible or Bible dictionary are essential even for very basic study.) So I took down my old Bible dictionary (King James Version), which, in a brief article, lists several animals, including apes, asses, badgers, bats, bears, “Behemoth” (which could possibly be hippos or elephants), boars, camels, cattle, deer, foxes, gazelle, goats, hares (Lev. 11:4, 6, Deut. 14:7), hart and hind, horses, hyenas, ibex, jackals, lambs and sheep, leopards, “Leviathan” (Job 38:8, 41:1), lion, mice, moles, swine, weasels, whales, and wolves. The Bible also lists sponges, corals, mollusks, fish, amphibians, reptiles, asp, chameleon, cockatrice (Isa. 11:8, 59:5, Jer. 8:17), geckos (Lev. 11:30), lizards, serpents, tortoises, and vipers. No cats, but the text mentions lions, a different genus but the same family.(1)

Actually the KJV translation includes dragons—Psalm 74:13, Ezekiel 32:2, and in Revelation—and unicorns.(2) A friend contacted me through Facebook and said that one of the youths in her church class had heard from a friend that there are unicorns in the Bible, and she wondered what I thought. Checking for her, I found nine references to unicorns, but in the older King James Version: Numbers 23:22; 24:8; Deuteronomy 33:17; Job 39:9-10; Psalm 22:21; 29:6; 92:10; and Isaiah 34:7. In the newer translations call them "wild ox," and one of my books says it was a now-extinct kind of ox native to Syria, not the mythical equine creature we think of. 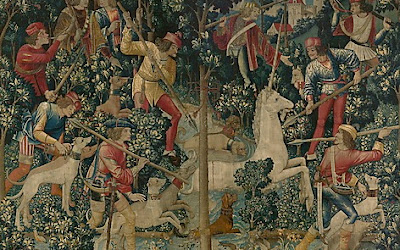 (This kind of thing in churches makes me a little crazy: folks hear from a friend of a friend that there are unicorns in the Bible, and thus unicorns must have existed or else the Bible isn’t true.  Such folks don’t take the time to do any investigation or, in the case of my friend, to check with someone knowledgeable.  In this case, the Hebrew word for a certain animal was translated with an old English word. )

As you notice animals in the Bible, have you noticed that a lot of the Bible happens outdoors? Think the travels of the patriarchs and their families; the people in the wilderness; the armies on the move, the ministries of Jesus. In one poignant Old Testament scene, Ezra commanded the people to repent of their sin, and the large multitude agreed—as soon as they could go inside from the heavy rain (Ezra 10:9-15). We know little about the place where Jesus lived (Mark 2:1, John 1:38-39); if he wasn’t visiting someone else’s home, he was outside somewhere, turning his observations of outdoor events into eternal teachings.

Once you notice the “outdoor” sections of the Bible, imagine the sounds in the background of the text: the sounds of wind blowing, the rustling of leaves, the crunch of stones as people walk, the lapping water of the waters, the flop of fish in the water, and the sounds of birds and animals. We read the Bible for teachings that pertain to our spiritual and moral lives, but what about the outdoor world that lies so close behind the words of God?  Read Psalm 8, 19, 14, and 136, all wonderful affirmations of God’s providential care of the natural world, the animals, plants, the earth itself and the cosmos.

I turn in my old Bible to Job:

The animals are wiser about God than Job’s friends, who try to be so theologically astute!
Look at Behemoth, which I made as I made you, says the Lord to Job, He is the first of the great acts of God (Job. 40:15a, 19a). At some point, I wrote in the margin of my old Bible, Humans and animals equal. In God’s speech to Job chapters 38-41, God tells Job that, bad as Job’s problems are, the cosmos is far greater. Humans belong within a larger world of the animal kingdom.

Rabbi Joseph Telushkin notes, “[T]he extensive biblical teachings concerning the kind treatment of animals are generally skipped over by most Bible readers. Ask people which of the Ten Commandments concerns itself with animals, and you will generally draw a blank.” It is the fourth commandment, concerning the Sabbath, which demands a day of rest for animals, too.(3) He continues that, for some reason, God allows people to eat meat following the Flood (Gen. 9:3), although vegetarianism seems to have been the original pattern for humans (Gen. 1:29). Nevertheless, the kosher laws of Leviticus restrict the kinds of animals God’s people should eat, and other Torah laws demand kindness and humaneness toward animals (Lev. 22:28, Deut. 22:6-7, 10, 25:4) (pp. 499-501). “A key doctrine of biblical morality is the concept of imitatio dei (imitating God). Thus, if God is loving and caring for animals, human beings are obligated to be so as well.”(4)

We don’t know what awareness of God animals may have, or how animals “duly and daily” serve God, as the poet Christopher Smart puts it. Nor do I know if the poet Schiller is right when he writes, in his Beethoven-set poem An die Freude, “even the worm [that is, the lowest of creatures] feels the joy of living” (wollust ward dem Wurm gegeben).  But I do know several things from the Bible:

*  Paul assures us that “the creation itself will be set free from its bondage to decay and obtain the glorious liberty of the children of God” (Rom. 8:21)

* When a bull gave up its life as an offering, the person offering the animal places his hand upon the animal’s head prior to the sacrifice, an actual contact with the animal who is serving the person in this way (Lev. 1:3-5).

* Jesus promises God’s tenderness for even the lowly birds (Matt. 6:26)

* Jesus identified with an animal, a sacrificial lamb.

* God’s providential care is not just about us human beings: what God’s doing for us, what we should be doing, where we fail, and so on. As God reminded Job in those powerful chapters 38-41, God’s activity covers far more than we can fathom.(5)

That gives us confidence. We know we have a strong Lord and Savior who doesn’t mind a bit that we---like our cats---are demanding and sometimes needy and come to him at all hours. I always turn back to that favorite psalm:

he who keeps you will not slumber.
He who keeps Israel
will neither slumber nor sleep (Psalm 121:3b-4)

5.  Theologian and preacher John Wesley preached on the divine gifts of life for the non-human world: John Wesley’s Sermon 60, “The General Deliverance,” http://new.gbgm-umc.org/umhistory/wesley/sermons/60/