"Walking with Jesus through the Old Testament" 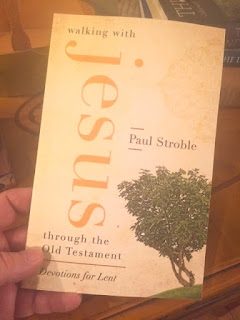 I didn't post very much on this site in 2014 and 2015, partly because of school commitments, and also I was working diligently on a book manuscript for Westminster John Knox Press: Walking with Jesus through the Old Testament: Devotions for Lent. It's available here, and also on Amazon, Cokesbury, and other book sites.

I begin with the story of the walk to Emmaus in Luke 24, which includes the verse: “Then beginning with Moses and all the prophets, [Jesus] interpreted to them the things about himself in all the scriptures” (verse 27). Later, Jesus’ two friends declare, “Were not our hearts burning within us while he was talking to us on the road, while he was opening the scriptures to us?” (verse 32). Although we don’t know which scriptures Jesus discussed, I chose forty Old Testament passages that are especially important for understanding Christ, and wrote meditations on each passage for each of the days of Lent. I began with Jesus' beginnings, moved through the early days of his ministry, connected him with great themes of the Old Testament and with significant Old Testament figures, and then concluded with Holy Week, Easter, and the Holy Spirit. Each day includes a prayer and at least one spiritual exercise.

My hope is that people will enjoy the book as a Lenten study, but it can also be used outside of Lent as a study of important Old Testament passages, and a clarification of its relationship with the New. I stress continuity of the two testaments and try very hard to avoid supersessionism. Many Christians don't care much for the Old Testament, but I love it and wish that more Christians loved and understood it better. So I've hopes that the Spirit can use the book to help folks delve more deeply into the sacred scriptures.

Posted by Paul Stroble at 7:21 PM No comments:

A couple years ago, I posted some aspects about the Torah, here. Lately I've been studying a wonderful book book by Harvey J. Fields, A Torah Commentary for Our Times, Volume Two: Exodus and Leviticus (New York: URI Press, 1991). In the chapter on the Parashat Mishpatim (the Torah portion Exodus 21:1-24:18: parashat means section and mishpatim means laws or rules), the author notes that this is not the only Torah section dealing with laws and mitzvot, which are found throughout the Torah, but it does begin a listing of laws following the giving of the Ten Commandments. The author notes that the 4th century Rabbi Simlai was perhaps the first to ask how many mitzvot are given in the Torah, and he gave the classic answer, agreed upon by Rambam (Maimonides): 248 positive commands (“you shall...”) and 365 negative ones (“you shall not...”). The number corresponds to the parts of the human body and the days of the solar year, respectively (p. 53). Other rabbis distinguished mitzvot bein adam le-Makom, or mitzvot “between human being and God”) and mitzvot bein adam le-chavero, mitzvot between a person and other persons. But this distinction between ritual and ethical commandments doesn’t imply that one is more important than the other, and rituals often lead to proper ethical actions (p. 54).

An aside: I know that this is a common Christian idea about the Torah: that ethical commandments are more important than the rituals. That may be true for Christians, but there is no basis in the text or in Jewish tradition.

Another aside: a rabbi friend tells me that about 300 laws can still be observed today. Those that pertain to the Temple, priesthood and sacrifices are not observed because those institutions no longer exist in Judaism, although even those laws can be studied and meditated upon today. Other laws are certainly followed by Jews today, although Jews do differ on issues of contemporary interpretation (just as Christians differ among themselves about biblical topics).

The author Harvey Fields discusses the views of Maimonides and other teachers, that the commandments are given to Jews by God in order to uplift one’s life to God’s will and to submit oneself to discipline (pp. 54-55). This includes the commandments that seem to have no particular connection to ethical improvement, or those for which the meaning is no longer understood. By practicing and/or meditating on the meaning of mitzvot, “we become more just and loving and add to the good n our lives and in the world” (p. 55).

Fields concludes, “the 613 commandments form the essential core of Jewish practice and tradition. Their blend of both the ethical and ritual is unique” (p. 56), for other religions tend to separate the two kinds of teaching.

How about the laws themselves? The Judaism 101 site has a helpful listening of the laws, arranged topically: http://www.jewfaq.org/613.htm She indicates which laws can still be followed and provides the scripture links.

The book I cited in that earlier post is by a Presbyterian author, William J. Doorly, The Laws of Yahweh: A Handbook of Biblical Laws (New York: Paulist Press, 2002). Chapter 6 gives all the laws in order.

Rabbi Joseph Telushkin has a wonderful book, from which I've taken notes elsewhere in this blog: Biblical Literacy: The Most Important People, Evens, and Ideas of the Hebrew Bible (New York: William Morrow, 1997). Part Two pertains to "laws and ideas" (pp. 397-510). Then Part Three gives a short summary and/or discussion of all the laws in order of appearance (pp. 511-592).

Posted by Paul Stroble at 6:22 PM No comments:

Labels: Torah
Newer Posts Older Posts Home
Subscribe to: Posts (Atom)
ORDER MY NEW BIBLE STUDY BOOK!
"Walking with Jesus through the Old Testament"
Although I'm now focusing on my primary blog, Journeys Home, I'm leaving this (now seldom updated) blog open as part of a larger online effort of renewed Bible study.
At about the time I turned 50, I purchased a new Bible (a New Revised Standard Version), in theory to replace my 30-year-old Bible which is a worse-for-wear hodgepodge of notes, jottings, and cross-references. As I lingered over both, however, I decided to increase the time I already spent in studying the Bible, as both a midlife resolution and an enjoyable, renewed devotion to study. This "Changing Bibles" blog contains notes, thoughts, and informal explorations. I also incorporated my notes into a series of essays called The Love of Bible Study, which you may access here. Also, some of the longer sets of notes are also posted at Bible Connections, here, and my reveries and research on a favorite psalm, 121, are found here.) My resolution to read the Bible clearly got out of hand, but in a good way.