Jesus' Baptism in the Jordan, and Joshua's Conquest 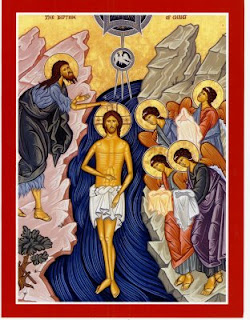 This week, some of my devotional periodicals contain pieces reflecting on Gilgal stories in Joshua 4: the Israelites’ crossing of the Jordan River, and the construction of a twelve-stone memorial to the event. Those devotions led me to a familiar book, the New Interpreter’s Bible commentary on Joshua.(1) I was going to think about those memorial stones, but my reading took me in a completely different direction.

Robert Coote’s section on that book is fascinating. The book is a portion of the (conjectured) source, the "Deuteronomistic History," which brought together older sources and which supported the soveriengty of the house of David and the primacy of the Temple of Jerusalem, as Josiah reformed Israelite worship and attempted to regain land that had been part of the original heritage of Joshua's conquest (pp. 556, 559). Coote's introduction contains essential information about the reforms of Josiah in the 600s and shows how the Deuteronomistic Historian of Josiah’s time crafted the book of Joshua, giving the Conquest (five or six hundred years before Josiah) an interpretation that brought together many stands of Israel’s history. Coote is also very helpful in drawing connections among Joshua and other scriptures. Here are a few.

* Although the Battle of Jericho is well known in Joshua, the splitting and crossing of the river is surely the most influential event in terms of Old and New Testament references (p. 599). But the ritual of crossing the water may have also been a Passover ritual, connecting to the splitting of the sea in Exodus 14 (p. 600). One of the key aspects of Josiah's reforms would have been the renewal of long-neglected feasts like Passover.

*The Deuteronomistic historian of Josiah’s day wants us to connect the event to the reconquest of the land by the power of God centralized in the ark (p. 599). The event is also referred to in Micah 6:4-5, among God’s mighty works. Verses 1-5 there has a Deuteronomistic tone, Coote writes, in the use of the characteristic phrase “in order to know” the Lord. (p. 599).

* A further link in the Deuteronomistic account is to David. Gilgal was the place where Samuel anointed Saul as king (1 Sam. 11:14-15) and also the place where Samuel rejected Saul (1 Samuel 13:8-15); cf. Joshua 7:1-8:29) and anointed David instead. A key theme of the Deuteronomistic history is the authority of the Davidic monarchy and the centering of the Temple in Jerusalem (p. 606).

* I posted about Jesus' baptism in a January 2013 piece. His baptism in the Jordan is not just a happy coincidence---rivers have plenty of water for baptism, after all, and the Jordan was handy. No pun intended, but the use of the Jordan River goes deeper than just its availability as a water source. John the Baptist might have set up shop at the Sea of Galilee, after all.

Coote notes that in the early church, Jesus is connected to the suffering and raised servant of Isaiah 40-55. But that suffering servant, in turn, is part of Second Isaiah’s message to the returning exiles: as God redeemed his people in Joshua’s time with the gift of land, so will God redeem his people as they return from Babylonian exile. So Jesus’ presence within the waters of the Jordan fulfills God’s promise to Israel in Isaiah 40-55 and also Joshua 4 (p. 602-603).

* But a further connection of Joshua 4-5 and the early church, is in the fact that the Israelite men were circumcised as they were camped at Gilgal (Joshua 5:2-9). Coote notes that the early church struggled with whether Gentile male converts to Christianity needed to be circumcised according to the Jewish law. “By making the rite of baptism and the baptism of Jesus a primary basis of his version of the gospel, and by showing how baptism recapitulates the basic themes of the exodus and the crossing of the Jordan under Joshua, Mark lays a basis for understanding the inclusion of the Gentiles in terms of just those scriptural texts that most clearly formed the basis for distinguishing between Israel and the Gentiles. In this sense, the Gospel of Mark represents a radical reinterpretation of the old Joshua in terms of the new Joshua, or Jesus” (p. 604).

* You could certainly also draw the Davidic link between the primacy of King David, affirmed by the Deuteronomistic history, and the new and different kind of king, Jesus of David's line, who is baptized in the Jordan.

I found all this fascinating, not only because I love discovering links and connections and allusions in the Bible, but also the question of why was Jesus baptized. That’s a topic often raised in Bible study groups: if Jesus was sinless, why was he baptized, and it must’ve been because of his identification with sinful people like you and me. But Coote’s interesting commentary shows that there are numerous significant aspects within scripture to show that Jesus’ descent into the Jordan waters is really tied to the whole history of biblical Israel.

One might also add a popular image from “old time” hymns: that of crossing the Jordan as an image of being with the Lord forever.

I’ve said this elsewhere on this blog; a big interest of mine these past several years has been deepening my understanding of ways the whole Bible fits together. Something at our previous church alerted me to the fact that many, many churchgoers aren’t clear on some essential Bible material, including the Hebrew/Jewish foundation and framework of the New Testament. The conquest of the land under Joshua is a culmination of God’s promise to Moses and, before that, God’s promise to Abraham, “a triumphant finale to the Bible’s foundational epic of liberation” (p. 555). But that epic underlay the affirmation of the Davidic monarchy, the promises to God's people voiced in Isaiah 40-55, and the life and ministry of Jesus Christ.

(1) Robert B. Coote, “The Book of Joshua," The New Interpreter’s Bible, Vol. II (Nashville: Abingdon Press, 1998), pp. 555-719.  In his introduction, Coote also cautions us to understand the violence and mayhem of the book of Joshua. There is the difficulty of verifying the account based on what is known archaeologically of the region, and there is also the fact that the book depicts ancient realities----Iron Age tribal societies, the importance of land for both nomadic and settled tribes, and settlement shifts in Palestine---rather than our modern ideas of nation-states, nationalism, and civil rights (pp. 556-558).