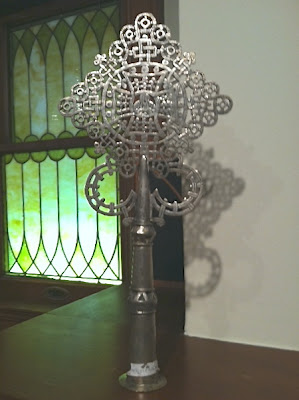 A couple months ago I found this beautiful Ethiopian Coptic cross for sale at the St. Louis Art Museum. The cross, with Christ in the center blessing bread, is made of armaments and thus is a symbol of the Lord's peace that overcomes human violence.

I thought of the famous verse from Isaiah 2:4 and Micah 4:3 and the contrasting verse Joel 3:10. I've seen these sets of verses referenced as an example of the variety of witnesses within the Bible.

Proclaim this among the nations:
Prepare war,
stir up the warriors.
Let all the soldiers draw near,
let them come up.
Beat your plowshares into swords,
and your pruning-hooks into spears;
let the weakling say, "I am a warrior" (Joel 3:9-10)

He shall judge between many peoples,
and shall arbitrate between strong nations far away; they shall beat their swords into plowshares,
and their spears into pruning-hooks;
nation shall not lift up sword against nation,
neither shall they learn war any more;
but they shall all sit under their own vines and under their own fig trees,
and no one shall make them afraid;
for the mouth of the Lord of hosts has spoken (Micah 4:3-4)

In days to come
the mountain of the Lord’s house
shall be established as the highest of the mountains,
and shall be raised above the hills;
all the nations shall stream to it.
Many peoples shall come and say,
"Come, let us go up to the mountain of the Lord,
to the house of the God of Jacob;
that he may teach us his ways
and that we may walk in his paths."
For out of Zion shall go forth instruction,
and the word of the Lord from Jerusalem.
He shall judge between the nations,
and shall arbitrate for many peoples;
they shall beat their swords into plowshares,
and their spears into pruning-hooks;
nation shall not lift up sword against nation,
neither shall they learn war any more (Isa. 2:2-4)

I forget where I learned about these verses and the seeming contradiction: in one place the people are called to create weapons from agricultural tools, and in the other two passages, the reverse is taught.

But this is a good example of the need to understand overall contexts of biblical writings rather than lift out verses from larger passages. We need to stop thinking simplistically about “what the Bible teaches” in the sense of isolated verses. In this case, it’s not that the Bible “teaches two different things” about tools and weapons. Rather, the passages are all looking to the future time of God's final victory, which will involve peace, justice and righteousness among all nations.

Micah and Isaiah both lived in the 700s BC. We don’t know when Joel was written----nothing in the text speaks to any particular time period, and scholars debate its original context----so we don't know which of these prophets first used the farm tools/weapons image and which inverted it. The Joel passage depicts the nations (the Gentile kingdoms) who have opposed the God of Israel and plan to make war upon the people. They are so confident that even the weak are eager to join the battle. Obviously, the ancient peoples aren’t going to run down to their nearest gun shop and arm themselves, and so they craft weapons from a handy source of metal: farming implements.

But as enemies of Israel come to the valley of Jehoshaphat, God summons his angelic armies to fight against the Gentile nations. This is the "day of the Lord," a recurring biblical theme of God's great judgment against wickedness. The next verse of Joel, 3:18, is the original prophetic image (reused in Revelation 14:14-20) of God’s victory as harvest of grapes put into the wine press of God’s wrath. The commentator in The New Interpreter’s Bible comments that although we recoil at bloody scriptures of God’s judgment because we prefer the loving and kind aspect of God, nevertheless God is an enemy of wickedness as testified in the Bible. “A God who is merely friendly is no match for such evil” (p. 334).

The other two scriptures are also eschatological---pertaining to God's final victory----but for a different purpose. In Isaiah and Micah, the nations have already come to God, and God’s reign will be a time of peace and justice. Therefore, no necessity exists for the crafting of weapons.

Whether your theological spectrum falls toward the Reinhold Niebuhr side or the John Howard Yoder side, passages like these invite reflection on what the response of Christians and others toward the establishment of peace and justice in the world. Clearly the power of change is God's rather than ours, but should we focus our energies on prayer and everyday acts of kindness rather than social change (considering the main power and initiative is God's)? Or should we also actively work for peace and justice?  Or some combination? That choice, too, is an aspect of God's guidance and initiative.
Posted by Paul Stroble at 5:50 AM