I’ve a whole category of favorite Bible verses that I remember because, at some point, I had to search for them because I’d forgotten or didn’t know their location. Now these passages stand out in memory. We have to discover for the first time even the most well known Bible verses, after all. (Such verses may also have personal associations with people and places, too.) I’ve several of these underlined or yellow-highlighted in my old Bible. Here's one: 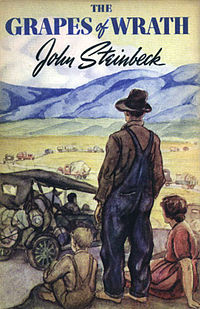 So the angel swung his sickle on the earth and gathered the vintage of the earth, and threw it into the great wine press of the wrath of God (Rev. 14:19).

I searched for that one when teaching a class on The Grapes of Wrath. I remembered the “Battle Hymn of the Republic” but not the location of the original scripture.

John Wesley, founder of Methodist, used this next verse to encourage Christian unity among doctrinal differences.

When he left there, he met Jehonadab son of Rechab coming to meet him; he greeted him, and said to him, “Is your heart as true to mine as mine is to yours?” Jehonadab answered, “It is.” Jehu said, “If it is, give me your hand.”  So he gave him his hand. Jehu took him up with him into the chariot (2 Kings 10:15).

Wonderful words. Do you love God and neighbor as I do? If so, let us love one another, even though we disagree.

Here are two verses that are well known:

I could’ve checked the household items for sale at the local Christian bookstore for that one. You can purchase Joshua 24:15 plaques for your front door.

That’s another verse featured on Christian products! This next one is the origin of an expression.

Then the Gileadites took the fords of the Jordan against the Ephraimites. Whenever one of the fugitives of Ephraim said, ‘Let me go over’, the men of Gilead would say to him, ‘Are you an Ephraimite?’ When he said, ‘No’, they said to him, ‘Then say Shibboleth’, and he said,‘Sibboleth’, for he could not pronounce it right. Then they seized him and killed him at the fords of the Jordan. Forty-two thousand of the Ephraimites fell at that time (Judges 12:5-6).

“Shibboleth” means a catchword, or a way of pronouncing a word that distinguishes a group.  The Hebrew word itself just means “stream.”

“Stream” makes me think of wading, which makes me think of being barefooted, as I like to be in nice weather, for instance, pleasant, shoeless walks down the sidewalk. I recalled (and then had to search for) a verse that I’d once noticed but had forgotten: Jeremiah 2:25a.

Keep your feet from going unshod
And your throat from thirst.

In context, the message is sarcastic: don’t wear out your shoes and parch your throat in your eager pursuit of idol-worship.  But I lightheartedly think: aren’t Bible people artistically depicted with bare feet? It must be okay as long as we’re not practicing idolatry!

What are some other “misplaced” passages?  I flip back to the Gospels. When I was a teenager and dated a Catholic girl, I wondered why Roman Catholics didn’t finish the Lord’s Prayer, ending with the words “deliver us from evil.”  Then I learned that Jesus’ prayer does indeed end there (Matt. 6:9-13, Luke 11:2-4).  So where does the doxology of the prayer come from?  At some point I learned it derives from David’s prayer in 1 Chronicles 29, specifically verse 11:

Yours, O Lord, are the greatness, the power, the glory, the victory, and the majesty; for all that is in the heavens and on the earth is yours; yours is the kingdom, O Lord, and you are exalted as head above all.

Here are several other scriptures that, at some point, I searched for, or “misplaced”:

And if he find [the lost sheep], truly, I say to you, he rejoices over it more than over the ninety-nine that never went astray. So it is not the will of my Father who is in heaven that one of these little ones should perish (Matt. 18:13-14).

Pride goes before destruction, and a haughty spirit before a fall (Prov. 16:18)

The effectual fervent prayer of a righteous man availeth much (James 5:16b, KJV)

Trust in the Lord with all your heart, and do not rely on your own insight. In all your ways acknowledge him, and he will make straight your paths (Prov. 3:5-6).

Cast your bread upon the waters, for you will find it after many days (Eccl. 11:1).

Do not be deceived; God is not mocked, for you reap whatever you sow (Gal. 6:7).

He that goes forth weeping, bearing the seed for sowing, shall come home with shouts of joy, bringing his sheaves with him (Ps. 126:6).

Darn it, now I’ll have that hymn stuck in my head all day!  It’s a religious “earworm.”

Then Samuel took a stone and set it up between Mizpah and Jeshanah, and called its name Ebenezer; for he said, "Hitherto the LORD has helped us." (1 Samuel 7:12).

That’s another scriptural reference for a hymn, “Come, Thou Font of Every Blessing,” and this next one inspired the hymn, “Almost Persuaded.”

Agrippa said to Paul, “Are you so quickly persuading me to become a Christian?” (Acts 26:28).

God helps those who help themselves.

Wrong! I’m being lighthearted again. That saying has been attributed to Aesop, and also to Benjamin Franklin. I’ve known at least one person who thought it came from the Bible.

I’m ambivalent about that saying. My own career has often benefited when I was adaptable, did my best, treated people rightly, and kept my professional options open. I work hard, solve my own problems, and have been praised for adding value to organizations. And yet … although Proverbs extols hard work and virtue, the Bible does not primarily teach competency and self-reliance. Rather, a key biblical theme is that God helps people who cannot help themselves; he takes the side of the sinful, helpless, and incompetent (cf. 2 Cor. 12:10). Proverbs 28:26a actually says, “He who trusts in his own mind [himself] is a fool.”

As long as I’m thinking about non-scriptures, I recall another popular saying, “Build it and they will come,” which is from the movie Field of Dreams (actually “build it and he will come”).  But I’ve heard the phrase quoted in the context of church building programs. It occurs to me that, someday, people may think the phrase comes from Nehemiah, a Bible book also often cited for building programs because of its theme of the rebuilding of the Temple. You’ve been warned!

While I’m still on the subject of movies … 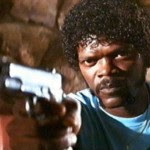 I looked up this verse after seeing the movie Pulp Fiction. One of the hit men (Jules, played by Samuel L. Jackson) quotes an elaborated version of the verse when he kills people. What happens to him is what preachers hope for: a Bible verse opens up for him, causes him to recognize his own evil, and inspires him to change his life. His partner, on the other hand, refuses to see the possibility of grace in a random-seeming event, and his refusal costs him his life.

Here is the reference for the well-known play and movie about the Scopes “monkey trial.”

Those who trouble their households will inherit wind (Prov. 11:29a).

And here is one more movie reference. The warden in The Shawshank Redemption has a picture in his office that reads, “His judgment cometh, and that right soon.” I researched it, and I believe this is a an Apocrypha text, Sirach 21:5, The prayer of the poor goes from their lips to the ears of God, and his judgment comes speedily. Of course, the movie’s warden cares nothing of the poor or God.