God's Glory, The Exile, Our Faith

It’s going to be summertime in a few weeks!  It already feels like summer today, with an unusually high temperature of 92.  When I first wrote this post, our church had recently hosted the week-long Vacation Bible School, which in turn reminded me of childhood experiences.  My own memories of VBS at my hometown church are very fond.  We met in an upstairs classroom in the then-forty-year-old church building, with a decent view of the nearby downtown and the shady Randolph Street.  We learned simple Bible stories and also some catchy songs, like “Do Lord.”

But the kingdom splits under the kingship of Solomon’s son, Rehoboam (1 Kings 12), between the Northern (Israel) and Southern (Judah).  The Northern kingdom is ruled by a succession of kings until the Assyrians conquer the nation in about 722 BC (2 Kings 17). Unlike the later Babylonians, the Assyrians resettle conquered areas, and so the 722 deportations not only result in the “lost tribes of Israel” but also the beginning of the Samaritans (2 Kings 17:1-6, 24-41, 18:9, 1 Chr. 5:26). (To this post I’ve added a few personal pictures of 8th century BC Assyrian carvings–from Tiglath-Pilasar III’s palace in Nimrod—from the British Museum in London.) 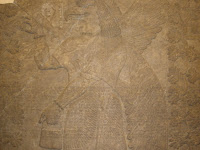 (In his book Biblical Theology of the Old and New Testaments, my professor Brevard Childs notes that the Assyrian practice of moving non-Jewish people into the land (2 Kings 17:24) was different from the Babylonians practice, as seen in the ability of the Hebrews to return after that exile. But that process of resettlement, and the origination of the Samaritans, set the state for continual conflict among the Judeans and other peoples during the period after the restoration: Hag. 2:10ff, Ezra 10:2ff, Neh. 4:1ff.)(2) 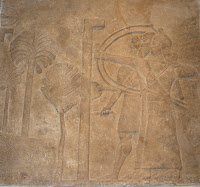 This overall period of Jewish history, from the rebuilding of the new Temple until its destruction by the Romans in 70 AD, has been called, appropriately, the period of the Second Temple. It was a period of great religious restoration and development for Jews. Scholars believe that the final collection and editing of the Psalms occurred during this period for the purpose of Temple worship and festivals.  Indeed, the final selection of the “canon”—the books of the Old Testament—was happening during this period. The institution of the synagogue also developed during this period to serve Jews who did not live in Jerusalem.  Jewish religious observance—the Sabbath and holidays, kosher laws, and so on—came to fruition during this time frame. So, too, did Jewish sects and teachers—the Essenes, the Sadducees, the Pharisees, and the sect at Qumran that developed the famous Dead Sea Scrolls.

Not long after the end of the high priest Jeshua and the governor Zerubbabel, helped by the prophets Haggai and Zechariah, supervised the rebuilding of the temple (Ezra 3-6). After the Old Testament period, Herod the Great began work on a restored temple in 20-19 BC, a building effort still going on during Jesus’ time and beyond. Herod’s temple was finally completed, ironically, just a few years before Roman forces destroyed it in 70 AD.