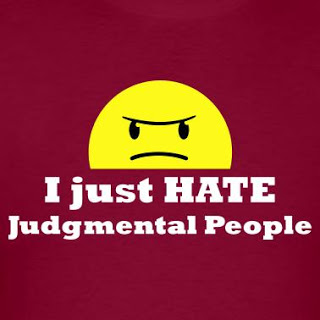 A while back, a friend asked me why I thought some Christians are so judgmental. I promised to think about it!

Maybe it's better to say "some judgmental people are also Christians." None of us can separate our psychological makeup from our faith. People who are naturally introverted, or controlling, or easily hurt, often express their personalities in similar ways in church settings, too; similarly, people who are quick to pigeon-hole and judge others, and people who want to others to change. (The character Angela in the NBC show The Office is a good pop-culture example of someone who, you assume, would be strict and stiff even if she wasn't religious. You shutter to picture the character Dwight Schrute as a Christian, without an accompanying personality overhaul!)

Having the Word of God at hand can be a powerful source for "judgmentalness": God said it, you don't measure up, that settles it. Some of us read scripture that way. Conservative and evangelical people tend to be accused of judgmental attitudes, but I think liberal and progressive people can also be quick to generalize, stigmatize and condemn. It's a tricky balance to be passionate about an issue or topic, and yet not dismiss or characterize those who disagree.

Of course, "being judgmental" doesn't have to be the same as having strong opinions and convictions. One might be perceived as being judgmental when s/he communicates personal convictions (again, whether they're stereotypical conservative or liberal issues); but she might be labeled as judgmental by someone who disagrees.

I wonder, too, whether judgmentalness (I know that's not a word: don't be judgmental toward me, LOL) is connected to certain stages of one's spiritual growth. This isn't always the case, but it can be. When I was a new Christian I was quick to pass judgment on certain things, but in retrospect, my attitude stemmed from my insecurities in faith and life, and my uncertainties how to be a Christian. I certainly lacked the inner peace that helps a person be strong, consistently kind and sensitive toward others.

Sometimes people are judgmental because they can't quite process the fact that other people's lives and experiences are not their own. They meet a single woman and make assumptions why she's not married. They meet a childless couple and wonder why they don't have children. Years ago, a few fellow pastors learned that I was interested in both parish work and getting a PhD, and they judged that I must be snooty and "ivory tower." Much worse, you can see how this kind of assumption-making isn't too far from racist, homophobic, and sexist attitudes. Any of these attitudes are painful when they're directed at you from fellow Christians; you hope they'd be more loving and considerate.

Unfortunately, generalizing harshly about other people is an easy habit for all of us, in part because it makes us feel better about ourselves.

Scripture does teach the potential need to warn others about their behavior or circumstances. Ezekiel 3:17-21 is a well-known example. This would be an easy scripture to use wrongly: throw tact to the wind, point out a person’s sin, and say to yourself, “Whew, I did what God wanted!” Nevertheless, according to this scripture, one might have the responsibility to warn someone about his or her actions. Similarly Paul voiced concern about immoral behavior tolerated by a congregation (1 Cor. 5:1-5) and also showed concern about another congregation (2 Thess. 3:6, 3:14-15; also Titus 3:10-11).

Jesus pointed out people’s sins. He was very harsh to the teachers who considered themselves superior to others (Matthew 23:25-28), and he told the woman caught in adultery to sin no more (John 8:1-11) although he was kind to her and, indeed, saved her life. But Jesus also loved people and involved himself with people whose lives were wrong, broken, judged harshly, and confused. To them, he shared himself.

Scripture teaches a responsible kind of judgment-making, but it is also very clear about the kindness and encouragement that go along with judgments! One should mind one's own affairs (1 Thess 4:11), one should be gentle and self-aware in one's judgments (Heb. 5:2, Gal. 5:1, 2 Tim. 2:24-25), one should be encouraging, helpful, and patient (1 Thess. 5:14), one should be concerned for peace rather than "wrangling" (1 Tim. 6:4-5, 2 Tim. 2:24-25). Why don't see these kinds of verses and focus on the ones about rebuking and fault-finding?

In Matthew 7:1-5 Jesus famously tells people not to worry about the speck in someone else’s eye until you take the log out of your own eye. It’s actually a very humorous passage, which definitely gets the lesson across: I'm walking around with a big ol' tree stuck to my face and yet I point out that your face doesn't look right and you need to fix it!

Just because you see something that you consider condemnable in another person, you need to ask, What is condemnable in myself, if "the whole truth" were known about me? When Jesus’ opponents said, “He eats and drinks with sinners,” the irony is that they who disapproved of the sin of others, were themselves sinners! But they (in their own eyes) seemed more righteous because their sins were more subtle and prideful.

Jesus also said, “Do not judge according to appearance, but judge with righteous judgment" (John 7:24). Here is another biblical warrant to be cautious how you judge someone: the person may seem to be doing something of which you don’t approve, but do you really know what’s going on with the person? Have you "walked a mile in his or her shoes"? Have you inquired into the person’s circumstance? (Remember that “judgment” in the legal sense means a decision based on all the known facts about a case.) “Being judgmental” implies an haughty assessment according to appearances, or to a one-sided appeal to scripture, without a person knowing the content of that person’s heart and experience (or your own).

And… how would you know what’s going on with the person, if you didn’t have some kind of friendship with him other? Those scriptures I cited earlier (four paragraphs up) place judgments within the context of fellowship, friendship, love, and empathy. It's easy to show scripture to someone to condemn or criticize them, but in a way that's distancing yourself from them, putting yourself above them. That’s why “being judgmental” is so easy to be and simultaneously is so disagreeable when we see it in others.

To cite the often-quoted 1 Corinthians 13: you can be right about everything, including your moral and theological judgments, but if you don't have love, you're just noisy.
Posted by Paul Stroble at 8:40 PM